The following excerpt is transcribed from The Future Of Now event that took place on 8 April 2021.

Cecilia is currently the Founder + Future Synthesist at Futurity Studio and former Senior Social Technologist at Alpha Telefonica Innovation.  As a serial entrepreneur, she is the founder of multiple companies, MOB, the largest co-working community in Barcelona, and FabCafe, digital fabrication lab meets coffee shop, and allwomen.tech, an AI training school for women by women to build the next generation of women and tech.

What is a ‘Future Synthesist’?

Synthesis /ˈsɪnθɪsɪs/
The combination of components or elements to form a connected whole.

Coined by the team at Futurity Studio, a Future Synthesist works towards actively building desirable futures by taking apart existing ideas and concepts to bring them back together in new undiscovered ways. While the basis of their work isn’t to create something entirely new, Future Synthesists build on the insights of scientists, engineers, speculative designers and futurists. From this, they are able to utilise a methodology they call ‘Synthesising Futures’.

“The future is for everyone. It’s not just my future, it’s not your future. The exploration of futures is for everyone. […] So imagine if we were to build a Google for futures? What that would look like? How can we learn from each other?
– Cecilia Tham, on building global future literacy.

Currently, Futurity Studio has four verticals of exploration; the Future of Food, the Future of Commerce, the Future of Gender Inequality, and the Future of Neural Interface. The cycle of each area begins as a new Lab where a problem/opportunity statement is established. From there, the team will go through the following three stages:

Once this cycle is completed, the team outputs the Actions that came from this exploration into a tangible plan.

These cycles have seen Artifacts like Polygenomic Plantable Meals (using tomatoes as a bio reactor to culture meat cells inside it), Electronic Edibles (passing electricity on the tongue to induce taste), Vapeohol (replicating the experience of eating without food substances) and Herbie – The Fluid Farm (giving plants autonomy).

Each stage of the Synthesising Futures methodology builds to create a clearer and more actionable path forward; from a high-level map, to a story, to a prototype, then finally a plan on how to proceed.

Inspired by the Futures Wheel tool, mapping helps to visualise and understand the advantages and consequences of a potential future scenario. From here, a story can be transcribed to form different perspectives around the problem at hand (i.e. the future of work from a robot’s perspective) and looking at all potential problems that might arise in the future. The next step is to create an object, or a future artifact, that allows for feedback and further insight on the limitations of the outcome – both from a user’s perspective and a functionality standpoint. Finally, a plan is put into place by envisioning the future scenario and working backwards to determine the steps and actions needed for that particular future to happen.

How do you determine the starting point when using the Futures Wheel?

CT: Before the Futures Wheel, we also have a one step before that, and we call that ‘Finding the starting point’. We start by looking at four different verticals or lenses per se. The first one is through the technological lens. So typically, something like artificial intelligence, machine learning, or nanotechnology. The second lens we look at is the challenges and the problems. This could be something like climate change, plastic usage or privacy. Then the third lens is business models. So that could be a peer to peer, a sharing economy, or a subscription model, whatever interests you most. The last lens is the future space. And this one is a little bit more nebulous and vague, but this is where I put things that I want to see. So, let’s say that my desired future is one where I don’t have to work anymore, or a future where, females are leading 90% of the government and are in CEO positions etc. We would need to see what the futures of these scenarios would look like.

Then what we do is we introduce constructive chaos. So we start mixing and matching these different insights to see if there’s potential to create desired futures. This way, you can begin to understand something like the chemical industry through a subscription model where you would lease chemicals instead of buying them and that could be a potential seed where you can start to explore further.

What are the typical tools you use for identifying and evaluating trends?

CT: I don’t have typical tools, but we definitely have tools that we use to understand and look at trends. We also use the three prongs [Method, Tools, Content] as our guiding light.

A lot of time when we’re doing research, we look at how many white papers or research papers have been published in that particular topic. Then we determine the success potential of that topic through a three horizon framework.

The first horizon is to determine whether the idea is even possible. We ask questions like, Can we even do this? Is it scientifically possible?, and then look for hints and evidence in scientific papers.

The second horizon determines whether you can build it. We look at the idea from an engineering perspective and ask, “Can we make it right? Can we scale it?” and then look to sources like popular media (Forbes, Wired) or startups using similar technology to get a sense of whether we should be moving towards that direction.

Finally, the last horizon is the business model. Can you build a sustainable business out of that?

By using these three validation points, we can get a better understanding of a particular area of interest and identify those that could have a higher potential of success.

What have been the biggest challenges of working with organisations that skew their focus towards short-term ROI?

CT: Companies tend to be myopic because they do have to address issues that directly impact the business. One of the biggest challenges is that they have a hard time envisioning what the future space looks like, and what the return on investment is for that particular future. The higher the risk, the lower the interest is for them to explore. So building that vision is a challenge.

A lot of people see exploring futures as a luxury and its our job to change that into a need. So, its about validating that all the work that goes behind things like the mapping exercises and the research isn’t about science fiction, but about opportunities. And the most important thing that a company needs to change is going from simply seeing and following trends to becoming a proactive, future maker.

I think a lot of people haven’t realised that the future is actually in their hands and that they can make it. If you can imagine it, validate it, and create it, then you’re actually proactively making the future that we want.

To see all our speaker Future Of Now book recommendations click here. 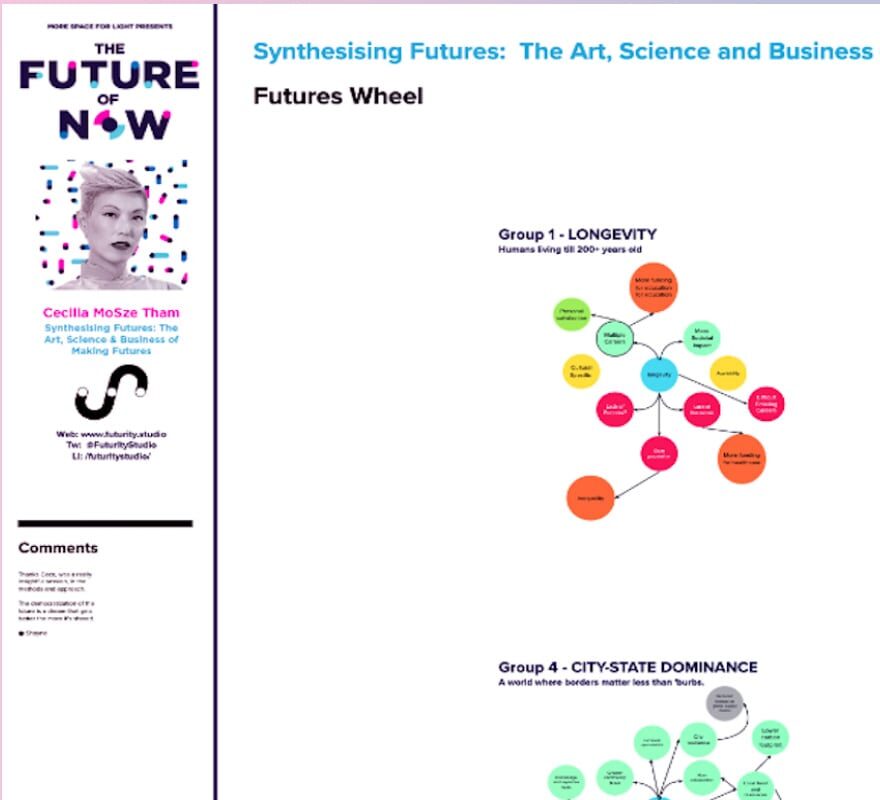 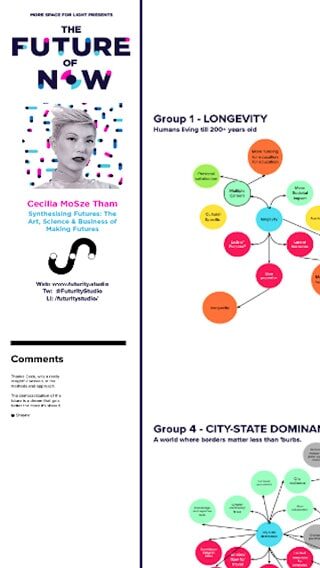 Select the link below to gain access to the Synthesising Futures: The Art, Science and Business of Making Futures MURAL template

About The Future Of Now series

Our goal at More Space For Light with The Future of Now (FON) series is to build a community of like-minded passionate professionals. We intend to bring together like-minded professionals to share, inspire, and explore new opportunities for growth. So you can discover new ways of working to bring back into your organisation.


More about the organisations connected to this event